A taste of the “old country”: ancient stories, Gaelic & bagpiping

(Ed. note: The following is a segment of an autobiographical sketch of Joe Peter MacLean, a well known Cape Breton fiddler of the Gaelic tradition. He was born and lives in Cape Breton, immersed in the insulated and uniquely Canadian Scottish culture of North Eastern Nova Scotia. His full sketch can be found here. This segment talks about a house visit from an elderly bagpiper recounting ancient tales from Scotland …”the old country”.)

“I always spoke Gaelic with the family when I was growing up, although I also learned English at the same time.  Back in that country some of them still used to tell some of the Sgeulachdan: the stories from Scotland about the fairy-people.  This one guy he used to tell the tales from Scotland and he’d keep going for hours and hours.  They told me that if they were listening to a story and they noticed that it was starting to get daylight outside, they covered over the windows to make sure it stayed dark until the story was finished. … And there’d be stories about kings and stuff like that and all kinds of different ones about the fairies and their magic.  Some guy would be sent on a journey by a king to get something or conquer this or that: if he’d make it back, he’d get the princess and so on.

And there was this other old guy named who was a piper who had gotten a lot of stories from his father about the piping, anyway, back in Scotland.  This old guy was about eighty years old and I was about eight or nine years old when he used to come visit us, 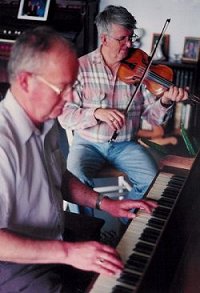 for hours at a time and he’d tell some kind of a story about the MacCrimmons: where they came from and something about how their daughters were better than the boys to play.  But I wasn’t listening to him good enough at that age to remember it very well.  Oh, and he’d also tell stories about pipers that would play certain tunes as a kind of code, to warn off the boats that were coming in.  I kind of thought that he was only fooling, but later I started reading about stuff like that in the books and I realized it was true.  And all those stories made me want to go over there myself.  Everyone said he had been a good piper, but he was pretty old then and so I never heard him.

My people came over from South Uist in a boat in 1821 and landed in the Sydney area and that’s how they came to Cape Breton anyway.”